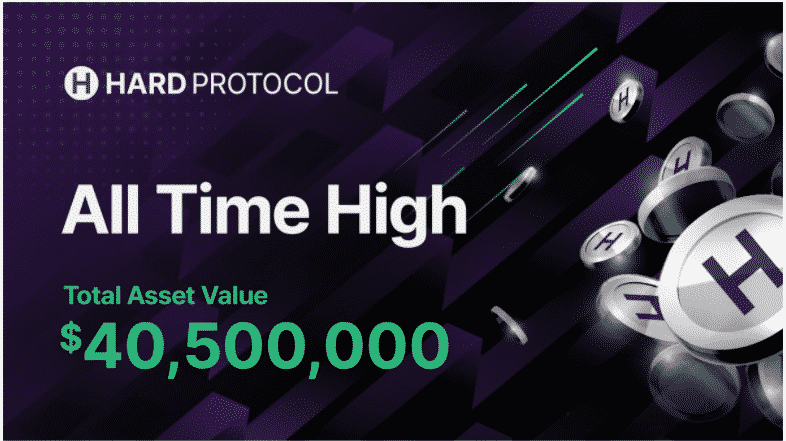 The price of HARD token rallied Immediately after the completion of Hard protocol Launchpool cycle on Binance, This uptrend is in line with previous projections and could mark what experts believe is the beginning of a sustainable upward price trajectory.

Hard Protocol has emerged as the most potent addition to the DeFi landscape in recent months. Its economic and infrastructural architecture is what propelled the platform to the limelight. It became the 7th project to be featured on Binance Luanchpool. The launchpool cycle kicked off on the 3rd of November, as a month-long staking or yield farming campaign designed to expose the project to the Binance community and reward participants with HARD tokens. Now that this campaign has come to a close the price of the token has started to reflect its potential.

In just under two months of operation, the total assets locked in Hard money markets have risen to over $40 million. Subsequently, Hard Protocol, according to DeFi Llama, is currently among the top 40 DeFi-based applications. More importantly, the price of the governance token has begun to reflect the ascent of the platform in the highly congested DeFi market. However, it is worth noting that this was not the case a few weeks ago when pundits examined the project and concluded that its native digital asset is grossly undervalued.

Throughout the launchpool cycle, there were reasons to question the value of the protocol’s governance token, HARD. Midway through this campaign, the price of HARD fell below the $0.4 mark, which was at the time an inaccurate representation of the growing status of Hard Protocol. While reacting to the apparent disparity between the expanding user base of Hard Protocol and the price of HARD, Brian Kerr, CEO of Kava Labs, stated that he is not concerned about the underperformance of HARD as it is expected of every digital asset with an influx in supply. He explained:

“For the next 30 days, over 6M HARD is being given away for free via launchpad to users that stake assets. I think it is natural for any asset that gets a huge influx of new supply to struggle in an open market.”

Kerr added that he expects the price of HARD to rise as soon as the launchpool campaign rounds up because by then, the supply of new HARD tokens must have reduced drastically. He also noted that the protocol utilizes an advanced bitcoin halving-like mechanism to ensure that the value of the digital asset maintains an upward trajectory. As projected, the price of HARD is up by 61% in the last 7 days. More significant is the fact that the price rally commenced at the close of the Launchpool campaign and had propelled the value of the token beyond $1.

Without any doubt, this price movement gives credence to Kerr’s earlier statements on the effect of the reward distribution campaign on the performance of HARD. However, if Brian Kerr’s stance on the real value of HARD is predictive of the future then the $1 valuation for each token is still on the low side. Below are some factors that support this claim.

Hard Is the Only Cross-Chain Money Market Today
The architecture adopted for Hard protocol allows it to integrate with a broad range of high market cap digital assets like BTC, XRP, KAVA, and BUSD. According to Kerr, the potency of this application lies in its ability to democratize DeFi to the broader crypto market as opposed to the current Ethereum-focused alternatives. He then projected that this functionality is compelling enough to fuel the TVL to the billion-dollar range in the shortest possible time, and it promises untold value to HARD holders. Kerr explained:

“HARD is a very powerful application that has the potential to grow into the billions of dollars in TVL. It can address a market much larger than its counterparts in Ethereum. With this in mind, any say or control over such a decentralized platform is very valuable – for the voting rights and fees that might be taken. Doing simple math, if 1% fee on $1 B in borrower value is implemented, it generates $10,000,000 in value for HARD holders. While not implemented yet, this is very powerful.”

Hodl Culture to Bolster Yield Farming
Experts believe that the current bull cycle stems from the decision of investors to escape the uncertainties of traditional asset markets by adopting Bitcoin as a store of value. While this is a given, we are a long way from the peak of the ongoing bull run, and in the meantime, yield farming seems to be the most prolific way of extracting more value from accrued crypto assets. As such, Hard protocol has a unique advantage because it is the only cross-chain money market that integrates seamlessly with Bitcoin.

“With the world increasingly turning to Bitcoin as a store of value and hedge against economic uncertainty, KAVA and the HARD money market services are well positioned as companion products for this new wave of digital asset investors because they provide the rare opportunity for Bitcoin holders to keep their exposure while earning double digit yields safely,” says Brian Kerr.

Kava Holds Similar Market Potential
Like Hard Protocol, Kava has what it takes to emerge as one of the most successful offerings in both the DeFi landscape and the crypto market as a whole. If we take into account the infrastructural ingenuity that powers the platform, then there is no reason why the value of KAVA, the governance token, should remain at the $1.50 price range for long. Considering the dynamism of Kava and the fact that it enables seamless DeFi integrations, the price of KAVA should easily surpass $3.50. It is worth mentioning that Kava has successfully solved issues arising from the permissionless model of Ethereum. Hence, it is a more viable DeFi integration option for corporations and banks.

However, the bone of contention is that Kava remains a hidden gem because many do not see it as a base layer with a similar or even superior pedigree to the Ethereum ecosystem. Instead, Kava’s viability is currently being compared with Maker, even though it is primarily a blockchain network designed to power dapps and DeFi protocols just like Ethereum. As long as this continues, it is impossible to categorically conclude that the current price of KAVA is a valid representation of the real value of the Kava platform. What this means is that there is enough room for growth even as more dapps and features begin to launch on Kava, starting with the activation of the borrowing side of Hard Protocol slated for the end of December.